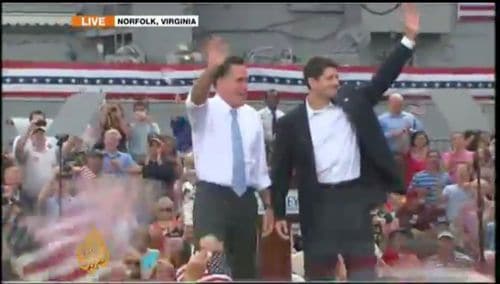 Rep. Paul Ryan is known for his wonky, information-packed speeches. Today, after Mitt Romney introduced Ryan as his running mate — and after Ryan strode manfully, tielessly forth from the belly of the USS Wisconsin — Ryan delivered a speech that was anti-wonky, and almost totally information-free. He sounded like he knew it, too. Ryan looked profoundly uncomfortable, save for a brief stretch in the middle of his address during which he talked about numbers and money. Mostly, the message was: Barack Obama's the problem, Mitt's the solution. Rephrase and repeat 'til the message sticks.

America is on the wrong track. But Mitt Romney and I will take the right steps, in the right time, to get us back on the right track.

Good to know. Watch Paul Ryan to talk to you like you're a toddler, AFTER THE JUMP …