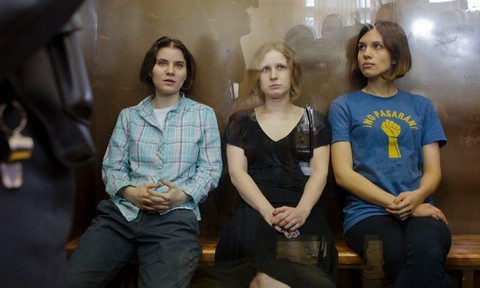 A trio of women from the punk collective known as Pussy Riot face two years in prison each after being found guilty of "hooliganism" for a recent protest against President Vladimir Putin at Moscow's Christ the Savior Cathedral.

"Our imprisonment is a clear and distinct sign that the whole country's freedom is being taken away," said member Nadezhda Tolokonnikova.

Tolokonnikova, Maria Alyokhina, 24, and Yekaterina Samutsevich, 30, say their protest on Feb. 21 was intended to highlight the close ties between the Russian Orthodox Church and state, and not to offend believers.

Their feminist punk collective has about 10 members who appear in public in ski masks for anonymous impromptu performances they describe as a form of protest art.

The three members have been held in jail since shortly after the appearance in the cathedral, awaiting the trial, which saw a parade of state witnesses say they were traumatized by the church performance, which prosecutors called an abuse of God.