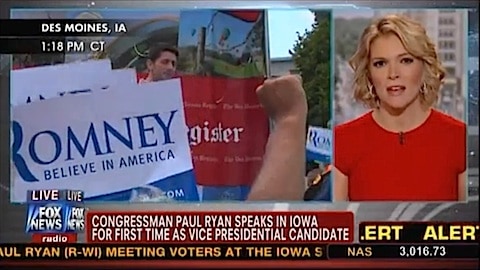 Paul Ryan was heckled relentlessly today as he tried to make a stump speech.

…he barely got a chance to compliment a spectator’s “cool” Packers jersey and offer an anecdote about how awesome State Fair wrist band days are before the heckling began.

Caught off guard for a second by a couple of women right in front, Ryan regained his cool and told the rest of the crowd that the women must not be from Iowa or Wisconsin since folks from those states are kind and respectful. He then pointed them out to security guards who crossed the stage and dragged the struggling women out.

Ok, back to it, right? Not so fast. Moments later, another couple, a man  and a woman, began shouting for Ryan to “Stop the war on the common good!”

Ryan fans tried to cover the protesters with Mitt Romney signs as Ryan tried to talk over the noise.

In related news, remarks by Mitt Romney in Las Vegas in May suggest that Ryan would fail at passing Romney's list of requirements for those wanting to be President: "At a May event in Las Vegas, Romney enthusiastically told the story of man who proposed amending the Constitution to require all presidents have three years of business experience, a criteria that would disqualify his own running mate."