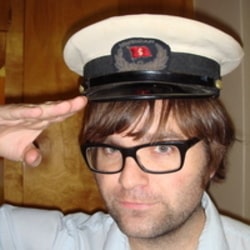 His reason? President Obama supports gay marriage. Here's a bit of Gibbard's testimonial, as told to his lesbian sister and her wife's future grandchildren, who of course can't envision a time when same-sex marriage wasn't accepted:

A lot of credit also had to go to our President, Barack Obama. In May of 2012, he went on national TV and expressed his support for gay marriage. It may be hard to believe but at the time, this was quite a controversial position to some people. He said he had "gone through an evolution" on the matter and felt it was time to share this view with the country (Vice President Biden also kind of forced his hand on the timing of this announcement but hey, who cares now?). He was the first U.S. president to voice support for marriage equality. His support continued through his second term and helped us get to where we are today: Gay couples that choose to get married receive the same rights and recognitions as straight ones.

The singer goes on to say he "want[s] a president who recognized that gay or straight, the rights of marriage couples should be equal."