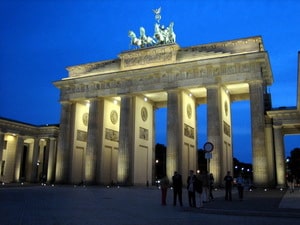 In a decision that further highlights fissures within Chancellor Angela Merkel's ruling Christian Democratic Union, Germany's constitutional court ruled yesterday that the country must give same-sex couples some of the same tax breaks as heterosexual married couples.

The court ruled that gay couples who have entered into a "registered partnership," the German legal phrase for relationships similar to marriage, must be exempted from the country's land transfer tax just like straight married couples, according to a court news release.
…
[Merkel's CDU] has traditionally been against tax equality for homosexual partnerships. But recently, 13 members of the party called for an expansion of tax rights for same-sex couples.

The group wrote that it feels it is not acceptable that "politics time and again has to be ordered by the constitutional court to abolish inequalities."

Kristina Schroder, Germany's minister for family affairs and also a member of the CDU, has signaled support for the push, saying, "the suggestion comes at exactly the right time. In homosexual partnerships, people take long-term responsibility for each other. They are living conservative values"…

That message – conservatism and equality go hand-in-hand – isn't isolated to only Germany: British PM David Cameron often makes a similar argument, as do conservatives here in the States.