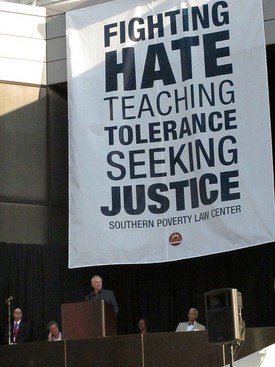 Mark Potok, Senior Fellow of the Southern Poverty Law Center, penned a post this afternoon in which he takes on Family Research Council president Tony Perkins and others' assertion that SPLC deserves blame for yesterday's shooting at his organization's HQ.

Reminding readers that his organization has spent four decades working to end political violence and have "strongly criticized all those who endorse such violence, whether on the political left or the political right," Potok says that Perkins' remarks are "outrageous" and amount to nothing more than a craven attempt to score political points.

Perkins’ accusation is outrageous. The SPLC has listed the FRC as a hate group since 2010 because it has knowingly spread false and denigrating propaganda about LGBT people — not, as some claim, because it opposes same-sex marriage. The FRC and its allies on the religious right are saying, in effect, that offering legitimate and fact-based criticism in a democratic society is tantamount to suggesting that the objects of criticism should be the targets of criminal violence.
…
Perkins and his allies, seeing an opportunity to score points, are using the attack on their offices to pose a false equivalency between the SPLC’s criticisms of the FRC and the FRC’s criticisms of LGBT people. The FRC routinely pushes out demonizing claims that gay people are child molesters and worse — claims that are provably false. It should stop the demonization and affirm the dignity of all people.