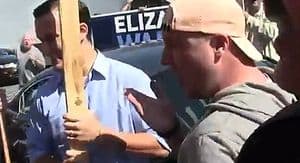 “The conduct of these individuals goes far beyond what is appropriate and proper in political discourse,” said Chief Bill John Baker in his statement, “The use of stereotypical ‘war whoop chants’ and ‘tomahawk chops’ are offensive and downright racist.”

Baker called on Brown to “apologize for the offensive actions of his staff and their uneducated, unenlightened and racist portrayal of native peoples,” and said, “A campaign that would allow and condone such offensive and racist behavior must be called to task for their actions.”