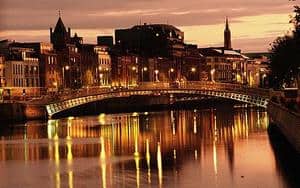 After much campaigning, equality activists in Dublin got their wish yesterday as the Irish city's council voted 38-4 to allow same-sex civil marriage there.

From a celebratory press release via Joe.My.God:

Two motions in support of marriage equality
were put forward – by councillors from Labour and Sinn Féin – and passed
at last night's council meeting, having been considered jointly. Dublin
City Council joins Cork City Council and Belfast City Council, who
passed similar motions in June, as well as Omagh, Down, Moyle and
Magherafelt District Councils who passed motions during the summer
months.

"This is a wonderful step by Dublin City Council to raise
awareness of this important issue at a local level. We'd like to thank
the councillors from both Labour and Sinn Féin for their initiative, and
our supporters in Dublin who spoke to their councillors over the last
few months about raising the issue," said Marriage Equality Director
Moninne Griffith.

"Marriage equality is not just a national issue, it's a
local one. It's about respecting and protecting loving couples and
families who are part of our communities and treating them as equal.
That is why putting the issue on the agenda at local level is so
important."

A lot of Irish lads and lasses are no doubt pretty pleased at the moment.