Famous Catholic author and talk show host Father Benedict Groeschel
put his Franciscan foot in it earlier this week, in an interview
with the National Catholic Register during which he offered some insight into his religion's ugly history of child abuse. From Raw Story: 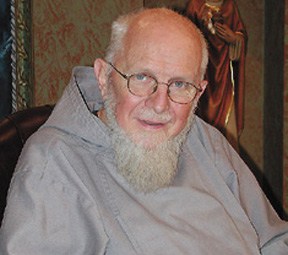 “People have this picture in their minds of a person planning to — a
psychopath. But that’s not the case,” Groeschel explained. “Suppose you
have a man having a nervous breakdown, and a youngster comes after him. A
lot of the cases, the youngster — 14, 16, 18 — is the seducer.”

“Well, it’s not so hard to see — a kid looking for a father and
didn’t have his own — and they won’t be planning to get into heavy-duty
sex, but almost romantic, embracing, kissing, perhaps sleeping but not
having intercourse or anything like that,” he continued.

Groeschel called the abuse “an understandable thing,” and pointed to
Penn State football coach Jerry Sandusky, who he called a “poor guy.”

Fr. Groeschel also pointed out that, until the past decade, what
secret things passed between priests and the youngest members of their
flocks were seldom viewed as criminal. Scandalous, yes; inappropriate,
yes; but criminal, no. Fr. Groeschel seemed to lament this state of
affairs. Whereas society was once willing to look the other way,
according to Fr. Groeschel, nowadays if "any responsible person in
society would become involved in a single sexual act — not necessarily
intercourse — they’re done."

First offenders, Fr. Groschel opined, should not be sent to jail.

Once the editors of the National Catholic Register realized what they'd published, they promptly removed the story from their webpage. It has now been replaced
with three apologies — one from the editors; one from the Community of
the Franciscan Friars of the Renewal, which Fr. Groeschel helped found;
and one from Fr. Groeschel himself. The Friars' apology contains these
poignant words:

Fr. Benedict has dedicated his life to helping others and these
comments were completely out of character. He never intended to excuse
abuse or implicate the victims. We hope that these unfortunate
statements will not overshadow the great good Fr. Benedict has done in
housing countless homeless people, feeding innumerable poor families,
and bringing healing, peace and encouragement to so many.

Fr. Benedict helped found our community 25 years ago with the hope of
bringing the healing peace of Jesus Christ to our wounded world. Our
desire has always been to lift-up humanity and never to hurt. About
seven years ago Fr. Benedict was struck by a car and was in a coma for
over a month. In recent months his health, memory and cognitive ability
have been failing. He has been in and out of the hospital. Due to his
declining health and inability to care for himself, Fr. Benedict had
moved to a location where he could rest and be relieved of his
responsibilities. Although these factors do not excuse his comments,
they help us understand how such a compassionate man could have said
something so wrong, so insensitive, and so out of character.

Yes — out of character. In fact, Fr. Groeschel has spent his career helping young people. In 1967, he founded the St. Francis House,
in Brooklyn — a shelter for homeless boys in their teens and early
twenties, which Fr. Groeschel still serves as Executive Director.