A gay German pro footballer, in an interview with the web publication Fluter, said that he's afraid to come out of the closet for fear of his safety, prompting a response from Chancellor Angela Merkel. 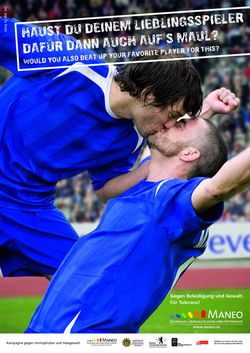 "The price I pay for living my dream as a Bundesliga player is high. I have to be an actor every day and go into self-denial. Unlike other celebrities, football players have to follow the footballer stereotype. They have to love sports, fight aggressively and be a role model at the same time. And gays don't follow that formula. I would not be safe any more if my sexuality was made public. I know of other Bundesliga players who are gay as well. We don't meet – it would just be too noticeable. It is a difficult parallel universe which continues inside the team. We don't talk about it much, nevertheless everyone knows about it. They sometimes ask me about my partner. I know all their stories from the papers, but they have to ask me to find out."

The player, who spoke to Fluter, said he, along with several other players in Germany's top division, is gay and explained: "I have to be an actor every day and go into self-denial."

His remarks led Merkel, speaking at a press conference in Berlin, to say: "You need not fear. I am of the opinion that everyone who has the strength and courage [to come out] should know that we live in a state where he essentially does not have to be fearful. That is my political statement."

He said he felt compelled to “put on an act and deny his true self” to square his public image with the expectations of fans, who are after a “stereotype of masculinity.” He also said the news media circus all but certain to ensue in the first few weeks after the first coming out of an active player was a major deterrent to going public.

Image: a German campaign fighting homophobia in sports featured two players kissing, and read: “Would you also beat up your favorite player for this?”