"Time travel hasn't been invented yet," Joseph Gordon-Levitt warns us from 2042 in LOOPER's voiceover. "But in the future it will be." In 2072 crime lords send their victims back in time to be killed by "loopers"  like Joe since it's the only way to get away with murder. (Apparently infallible forensic science has also been invented in the future!).

Loopers dispatch their prey unceremoniously with a crude descendant of the shotgun called a  "Blunderbuss" which is useless at long distances but impossible to miss with up close. When each Looper's contract expires, his older self is sent back to his younger self for execution which is called "Closing the Loop". In this case that's Bruce Willis sent back in time to meet his death at the hands of Joseph Gordon-Levitt in Bruce Willis drag. (Joe's makeup effects, though extraordinarily non fake-looking are initially distracting — JGL doesn't look like that!)

MORE AFTER THE JUMP…. 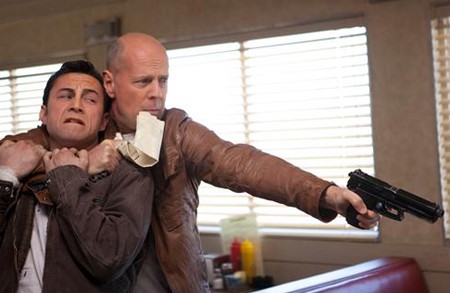 Nothing kills genre films quicker than exposition. When you have to pass out glossaries to the uninitiated or explain the rules over and over again, a story can sputter and die or, at the very least, bore you stupid the second time through. Looper, however, is a wonderfully nimble exception given the size of the learning curve. Every little factoid here, whether casually tossed off, outright explained in narration, or visually suggested pays off organically and the movie is free to spend it's time and things that are a lot more interesting like its characters, how past and future relate to one and another and audience-baiting "would you?" moral questions about whether the end will justify the means.

The Loopers are paid in silver which is a clever Biblical way of signalling the movie's loftier thematic ambitions and moral slipperiness. Joe, who we immediately think of as the hero solely on the virtue of being the protagonist, pulls a Judas early on and this hero thing is really called into question. Once Joe fails to close his own loop — no one Dies Harder in the movies than Bruce Willis — the chase begins and the movie takes off and in surprising directions, too. [No spoilers here — the trailer had the good rare sense to save some of its best moments.] 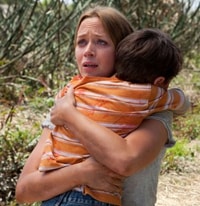 Young Joe vs. Old Joe, which provides the middle of the movie with much of its action, power and humor keeps asking you to shift allegiances and somehow manages to flatter both older and younger audiences without pandering to either. Soon the plot pieces and moral quandaries grow as high and maze-like as the cornfields young Joe hides in outside the farm of Sara (Emily Blunt) and her boy Cid (Pierce Gagnon).

It helps to have three completely engaging stars to sell material this convoluted. Joseph Gordon-Levitt, so unusually slim and mischievous-looking for typical action-hero duties, doesn't lose his star appeal under the makeup; Emily Blunt turns it out both maternally and sensually as the suffering mom / love interest; and finally there's Bruce Willis. He is, as ever, one of the very best movie stars with an underappreciate ability to shift his Bruceness just so to meet the very specific demands of multiple genres and unique filmmakers.

What a surprise Looper turns out to be, both in its scripted novelistic layers, its minimalist visual panache (an extremely smart choice with such a complicated story to deliver — the few big f/x moments to really pop) and its overall accessibility.

Writer/Director Rian Johnson first made a name for himself with Brick, a teen noir that won a small hardcore group of fans but was so in love with its own hipster reflection that it forgot to ever look to the audience that might be watching it and looking for a way inside. Looper's world is, in its own, way is just as sealed off with strange new behavioral codes and verbiage. But this time Rian Johnson is as sure-handed and quick as Joe the looper. He's armed with a blunderbuss and blowing massive holes in each potential obstacle to your entertainment, inviting audiences to come racing in. Which they might once word-of-mouth kicks in. 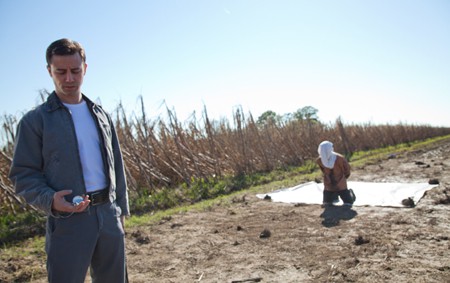