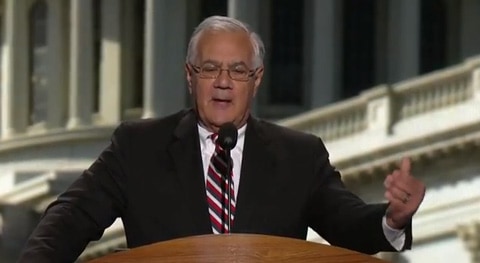 Barney Frank ripped Mitt Romney's record on job growth as governor of Massachusetts, coining a new term for the GOP's presidential nominee that poked fun at his own speech impediment.

"This is a hard one for me because of my diction, so listen carefully. Our governor was Mitt Romney. What we should have had as governor was 'Myth Romney'. 'Myth Romney' is a wonderful private sector executive who when he moves into the public sector can transform it. I wish that 'Myth Romney' had been governor of the state I lived in."

He jabbed at Romney's flip-flopping as well: "There were a lot of Romneys. There’s the Romney who was going to be better on gay rights than Ted Kennedy; now there’s a Romney who checks with Rick Santorum on that issue."