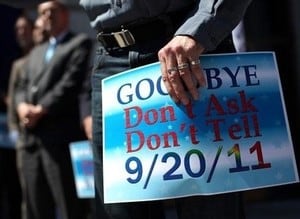 Former Congressman Patrick Murphy, the moderate Democrat instrumental in Don't Ask, Don't Tell's repeal, reflected on the one year anniversary of the discriminatory law's demise today at The Daily Beast.

"Today, we mark the first anniversary of the repeal of Don’t Ask, Don’t Tell," Murphy writes. "We recognize the thousands of troops who were unfairly targeted by the policy and thank them for their service to our nation. We take a moment to celebrate the fact that our military has made historic progress in the march toward full equality for all men and women."

DADT's end wasn't simply about the armed services; it was the beginning of a new era in America.

By relegating DADT to the history books, we paid tribute to principles of fairness and justice on which this nation was founded. True, there is much more that must be done to ensure that the rights of all Americans are recognized by our military and by our government. But this historic achievement is paving the way for progress.

It has fundamentally changed the political landscape as it relates to LGBT rights. Openly gay candidates like Sean Patrick Maloney, who is running for Congress in New York are changing the conversation. Sean and his husband have been together for 20 years and they have three wonderful children. His family is central to his campaign. Not just to promote LGBT equality—which he does—but to connect with average voters concerned about education and the economy.

Thanks to President Obama’s leadership, marriage equality was included in the Democratic Party platform—the first time this has ever happened. Since DADT was repealed, four states have passed legislation supporting gay marriage.

Murphy's optimistic that these developments, as well as shifting public opinion, particularly in states like Minnesota that will vote on equality in November, are the stepping stones to a more inclusive nation, but warns that citizens must not become complacent with regard to opponents to equality.

This election, on a national and state level, presents voters with a choice, he says; one that will either lead our country in the right direction or right back to a discriminatory sexual caste system. "On November 6th, our nation will decide what path we take—a path that leads us backward to a less just past, or the challenging but necessary path forward toward a more perfect union for our country’s future."

Towleroad legal guru Ari Ezra Waldman says Murphy is one of the people who really "gets it". "Don't Ask, Don't Tell was not only a discriminatory, odious law that violated our constitutional tradition," he says, "but its repeal and relegation to the dust bin of history was essential for the removal of every future vestige of discrimination: most notably, DOMA and state marriage bans."

"[Murphy] also understands that the best way to win greater political and legal success is to support candidates like Sean Patrick Maloney, who will not only be a great congressman, but who proudly bring their gay identities to Congress to help all Americans." And, I'm sure, inspire a whole new generation of fair-minded leaders.

Previous Post: « Cuomo and Bloomberg Back Embattled Pro-Gay GOP Incumbents
Next Post: Romney Would Want Gay Grandchildren To Be ‘Happy,’ But Not Married: VIDEO »