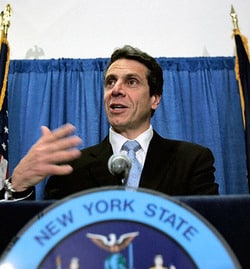 New York State Senators Stephen M. Saland and Roy J. McDonald, two of the four Republicans to vote for marriage equality in the Empire State, are currently in political limbo.

After last week's primary vote, both men are awaiting recounts to see if they've actually survived conservative efforts to oust them for their pro-equality politics. And with the ballots being reexamined starting today, the men are getting some vocal support from two big NY names.

First, Gov. Andrew Cuomo this morning threw his weight behind the embattled senators.

Saying their votes for "an act of political courage" that bucked their party's dominant thinking, Cuomo pointed out that lawmakers are not always meant to agree with their constituents; they're meant to do what's right, a point that's so often lost in the political back-and-forth.

“I don’t believe we elect officials to always agree with us,” Cuomo remarked, according to the New York Times. “We elect officials to use their best judgment and to be people of character and integrity, and I think this vote, which was a difficult vote, showed character and integrity. I hope it works out for both gentlemen. They’re in the middle of recounts now, and I hope it works out — I hope they get re-elected."

New York City Mayor Mike Bloomberg also came out for Saland and McDonald. "No matter what happens in the election, they’re going to have the satisfaction of knowing for the rest of their life they stood up and voted their conscience, and they did it in a world where that’s harder to do today maybe than it’s been in a long time," said Bloomberg, who gave $10,300 of his billions to each of three pro-equality state senators who ran for reelection. Mark Grisanti won by a landslide and the fourth supportive senator, James Alesi, retired.