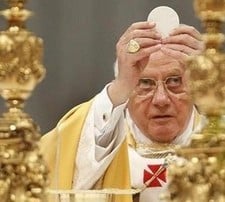 Taking off his mitre and putting on his engineer's cap for a moment, Pope Benedict XVI yesterday deemed same-sex marriages "defective" during a speech before French bishops.

The Pope's remarks come as French politicians debate potential legalization of marriage equality, and clearly the Pope wants his Franco peers to use their religious influence to keep the status quo.

"The family is threatened by a conception of human nature that is proven to be defective," said the leader of the Catholic Church. "Defending the family and life in society is prophetic and anything but regressive. Marriage and the family are institutions that must be promoted and defended from every possible misrepresentation of their true nature, since whatever is harmful to them will in fact be injurious to society itself."

Other translations from the original French report have the Pope saying that the family is "threatened in many places by a faulty conception of human nature," which is slightly different than "defective" but the diagnosis remains the same.

Benedict also told the Bishops, who have been very vocal in their opposition to equality in France, that they have a responsibility to "call us courageously and optimistically to seek a bold and creative response, by presenting the permanent newness of the Gospel."

Despite the Pope's protests, France seems set to pass equality sooner rather than later. President Francois Hollande and Prime Minister Jean-Marc Ayrault have both indicated a bill will be introduced next month, which means, if the Pope is right, France will completely breakdown by Christmas. Mon dieu!