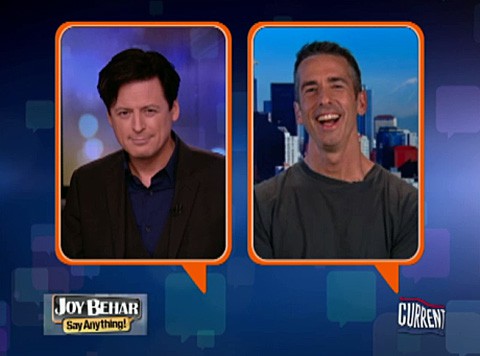 John Fugelsang, sitting in for Joy Behar, asked Dan Savage whether Mitt Romney's a true homophobe, or just plays one on TV.

"I don't make a distinction between an honest bigot and a dishonest bigot…Whether someone punches you in the nose because they really hate you, or they punch you in the nose because they want to impress people who hate you, you still have a broken goddamn nose. I'm not going to look into Mitt Romney's stony little heart, I'm not going to bust open that bank vault in the Cayman Islands and retrieve his heart to look at it. What I care about is policy. And his policies are homophobic and by my estimation, that man is a homophobe."

Previous Post: « Maryland’s Marriage Equality Measure, Once a Notable Omission, Shows Up on ‘Freedom to Marry’ Agenda
Next Post: ‘The Hunger Games’ Gets the Bad Lip Reading Treatment: VIDEO »