On Tuesday I reported that Justin's Gift, an LGBTQ youth group in Anoka, Minnesota named for deceased bullying victim Justin Aaberg, had its application to join the town's massive Halloween parade turned down. Organizers said there wasn't room. 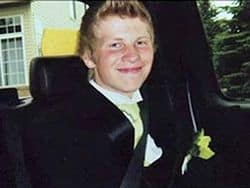 Minnesota Public Radio finds a lot of holes in that excuse:

Justin's Gift, a nonprofit group created to support gay youth after several suicides in the Anoka-Hennepin School District, received a letter dated Sept. 25 denying their request to walk in the Oct. 27 parade. The letter is signed by the parade chair, who included only her first name, Liz.

"At this time we are unable to accept your application for the parade," the letter said. "We have reached our maximum for walking units."

However, the application for the parade license, obtained by MPR News, was not submitted until today — 15 days after Justin's Gift was told the parade was full.

The application, submitted to the city of Anoka by Elizabeth McFarland, estimates the parade will include approximately 31,000 people, 250 parade units, 200 vehicles, 50 dogs and 12 horses. McFarland did not return a call seeking comment.

The youth group says it has 30 kids who want to march.

As I noted on Tuesday:

Anoka, Minnesota has a poor reputation for handling the needs of LGBT youth. As you may recall, the Anoka-Hennepin School District last March settled a federal suit filed in 2011 by civil rights groups and six student plaintiffs over a sexual neutrality policy blamed for bullying linked to the suicides of seven students over a two year period.

Anoka bills itself as the 'Halloween Capital of the World'.

The Chamber of Commerce's phone number can be found here. Other contact info here.