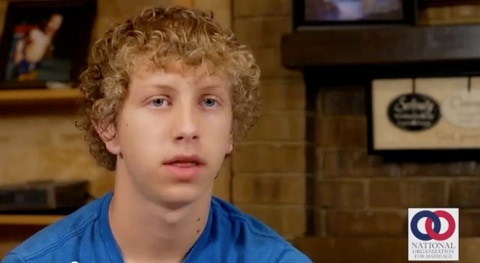 Dakota Ary, the Texas teen who became a conservative celeb of sorts in September of 2011 after being suspended for an unverified incident in which he reportedly spoke out against homosexuality in class – "I'm a Christian and, to me, being homosexual is wrong." – appears in a new video for NOM's "Marriage Anti-Defamation Alliance" along with his mom.

But regardless of just how anti-gay young Dakota was on that day, the truly ridiculous thing about the National Organization for Marriage now using Dakota in a "Marriage Anti-Defamation Alliance" video comes in the little fact that Texas is about as far away from marriage equality as any one state in this nation. Whatever went down in Dakota's case, it was not about the national conversation surrounding civil marriage rights—it was about basic respect for LGBT people during the public school day! He did what he did in a red state with no legal recognition of same-sex couples. A rejection of the casual peace of mind that all students deserve when they head to school is not supposed to be among NOM's goals.

At least it didn't used to be among NOM's goals.