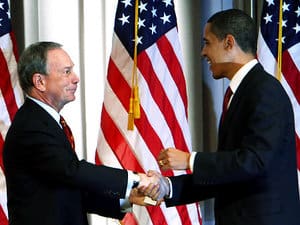 New York City Mayor Mike Bloomberg hasn't made an endorsement in the 2012 presidential election, but told the New York Times he's "more in sync" with President Obama on matters like marriage equality and abortion. He also told the paper that he thinks Vice President Joe Biden deserves more credit than Obama on pushing the administration toward supporting gay marriage.

Though he is more likely to agree with Mr. Obama than with Mr. Romney — on same-sex marriage, climate change and abortion rights — he expressed disappointment with the president’s leadership.

“I am more in sync with President Obama’s views on social issues,” he said. “I will say that I don’t see as much action as I would like, and it’s nice to be on the side that I think you should be on, but unless you do something, so what?”

Mr. Bloomberg was asked how he could make that criticism given the president’s announcement last spring that he supported same-sex marriage.

“Let’s get serious here: it was Joe Biden that forced that issue,” he said, referring to the vice president’s surprise remarks backing same-sex nuptials that were credited with forcing Mr. Obama to follow. “Some people say he just goes off; I would say he’s a principled guy.”

Bloomberg's interview comes as the billionaire prepares his post-mayoral legacy: last week he announced the formation of Independence USA PAC, a super PAC that will only support candidates who believe in gun control, education reform and marriage equality.