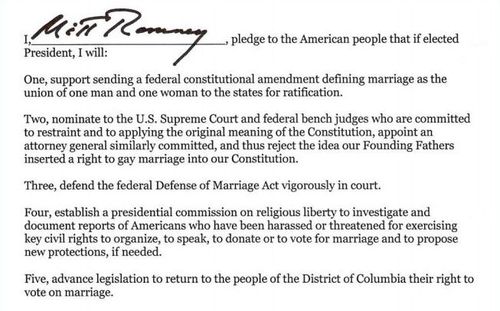 After last week's debate, Mitt Romney campaign senior adviser Bay Buchanan told The Advocate's Julie Bolcer that the former governor thinks marriage equality should be left to the states. "He very much supports traditional marriage, but he's also a very strong advocate for the Tenth Amendment. It's a state issue," said the openly gay sister of Pat Buchanan. She also reportedly said Romney would not try to stop any state-based marriage rights fights.

BuzzFeed's Chris Geidner wonders today whether this means that Romney, one of the candidates who signed the National Organization for Marriage's pledge to fight for a Federal Marriage Amendment and also a NOM donor, is changing his tune to appear more moderate. Romney does, after all, have a habit of adapting policy to fit a political climate. "The decision to stop supporting the proposed Federal Marriage Amendment would be a moderating move for the Romney campaign, whose party platform includes support for the amendment," writes Geidner. The Romney campaign did not answer his repeated requests for comment.

There will be few opportunities to ask Mitt Romney whether he supports states' right or the conservative Federal Marriage Amendment, but if his website is to be believed, Romney's still firmly on the right.

From his campaign page called "Values":

Marriage is more than a personally rewarding social custom. It is also critical for the well-being of a civilization. That is why it is so important to preserve traditional marriage – the joining together of one man and one woman. As president, Mitt will not only appoint an Attorney General who will defend the Defense of Marriage Act – a bipartisan law passed by Congress and signed by President Clinton – but he will also champion a Federal Marriage Amendment to the Constitution defining marriage as between one man and one woman.

See a screenshot AFTER THE JUMP.

Governor Romney supports a federal marriage amendment to the Constitution that defines marriage as an institution between a man and a woman. Governor Romney also believes, consistent with the 10th Amendment, that it should be left to states to decide whether to grant same-sex couples certain benefits, such as hospital visitation rights and the ability to adopt children.

I referred to the Tenth Amendment only when speaking about these kinds of benefits – not marriage. 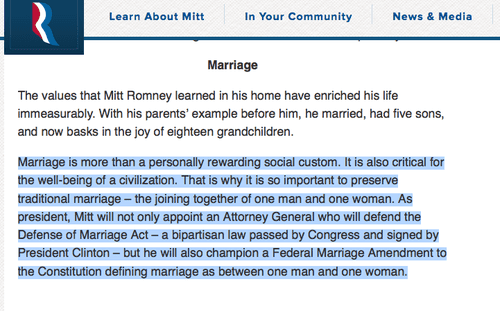