Ben Gibbard of Death Cab for Cutie talks about his support for marriage equality, and the joy he felt at seeing his sister marry, in a Daily Beast post: 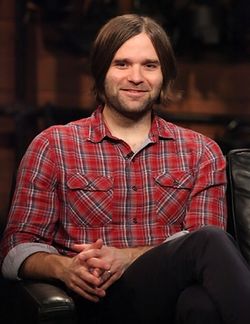 It was at Capitol Hill out here in Seattle. My sister was in this beautiful dress and her wife was wearing this great suit. It was the most beautiful thing I’d ever seen. I was tasked with playing a few songs during the wedding and I just couldn’t get through it. I was bawling. It was just too much joy.

At some point over the course of the evening, I remember talking to my dad and he told me, “This is more wonderful than anything I could have expected for my daughter … This is it.” My sister found this amazing human being and it was the same joy, the same love, and the same experience as any straight wedding I’d ever been to. For me, it was much more emotional because it was my sister—and also just being there and seeing my parents overwhelmed with pride and joy. When she came out they initially thought, Our daughter’s life is not going to be what we thought it was, but it turned out to be greater than anybody could have possibly imagined.

My familial ties are one of the many reasons that I’ve become involved in raising money to help push through Referendum 74 (R-74), to approve the February 2012 bill that would legalize same-sex marriage in the state of Washington. If Washington State can pass this referendum, we’d be the first state to pass gay marriage by a popular vote. The opposition is very strong but the thing that gives me hope for the future is that marriage equality is polling at about 80 percent among people under the age of 25. This issue isn’t going to go away; support is only going to get stronger and the voices will only get louder. I would just feel so much pride for my state if we could pass it by a popular vote and show the rest of the country that this is the direction we are going in.