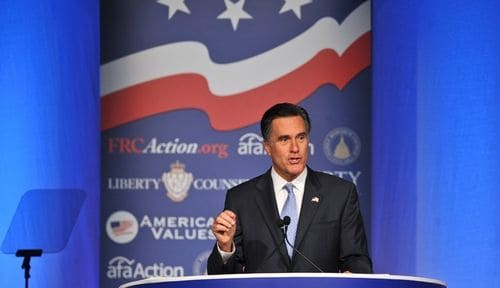 For the first time since backing Richard Nixon in 1972, the Des Moines Register today backed a Republican presidential candidate, Mitt Romney, because they think Romney's business background will help stabilize the economy.

Though the editors say President Obama made the right move with the stimulus package, they think only Mitt Romney can renew consumer confidence, which they claim will result in more industrial investment. The paper also believes Mitt Romney can overcome the obstructionism that hampered President Obama. But the Republican can only do so if he abandons the right wing agenda that helped him win the primary:

Romney should not squander an opportunity to build consensus in
Washington by wasting time on issues that animate many in his party. We
cannot rewind the clock on progress for minorities, women, gays and
lesbians. We must make it easier for immigrants to come here to live and
work legally and stop making criminals of those who are living here
lawfully, paying taxes and raising families. The federal government must
continue to insist on clean air and water and encourage clean and
renewable energy.

The paper, which endorsed Romney during the primary, acknowledges that Romney shifted to center after winning that race, but thinks the man we see now is the "real" Romney, meaning he's more moderate than he let the right believe. His campaign's recent announcement that they still support a Federal Marriage Amendment says otherwise.