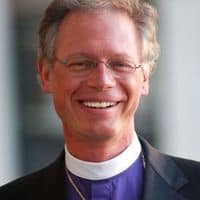 Writes Andrus, of his arrival at yesterday's installation:

An archdiocesan employee attempted to escort me upstairs with the Greek Orthodox group, but was stopped from doing so by the employee to whom I had first identified myself. This person, who appeared to be in a superior role, instructed another employee to stand with me.

At this point no other guests remained in the downstairs area. The employee and I chatted while waiting. I began to wonder about the time holdup. I checked my phone; it was 1:50PM. I asked the employee standing with me if the service indeed started at 2, which she affirmed.

At 2PM, when the service was to begin, I said to the employee, "I think I understand, and feel I should leave." Her response was, "Thank you for being understanding." I quietly walked out the door. No one attempted to stop me. No attempt was ever made to explain the delay or any process for seating. I arrived early, before the time given my assistant, and waited to leave until after the service had begun.

My intention for attending the installation was to honor our ecumenical and interfaith relations in the Bay Area.

Previous Post: « Did Romney Use a Forbidden ‘Cheat Sheet’ at the Debate? – VIDEO
Next Post: A Raunchy Chick-fil-A Tribute Anthem: VIDEO »