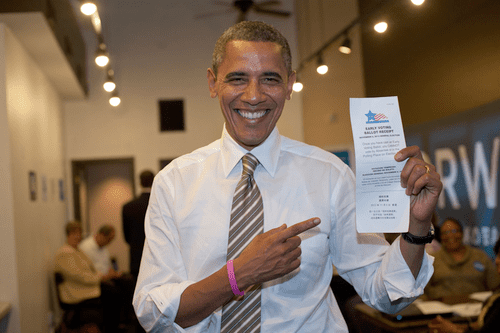 According to a Gallup poll, if the 71% of registered LGBT voters who say they are voting for Obama actually do, they could tip the scale in the president's favor.

From Gallup, via the Williams Institute at UCLA:

A new Gallup Report finds that 71% of LGBT Americans who are registered
voters support President Obama for reelection, while 22% support
Governor Mitt Romney. From June to September, non-LGBT registered voters
preferred Romney to Obama by one percentage point, 47% to 46%. However,
when LGBT voters are added to electorate, Obama moves slightly ahead of
Romney (47% to 45%).  These findings suggest that the highly Democratic
vote of the LGBT population could be enough to swing a very close
election toward Obama.

The findings are based on more than 120,000 interviews of adults in the
US, which represents the largest representative sample of LGBT men and
women ever collected.

The Gallup poll also found that 20% of self-identified LGBT people describe themselves as conservative or very conservative. Also most LGBT people approve of Obama's work — 68% said they approve, while 28% said they disapprove of the president's job — and LGBT people apparently are not registering to vote as much as their straight counterparts: "About three-fourths of LGBT individuals (74%) say they are registered or
plan to register to vote, compared with 80% of non-LGBT men and women."