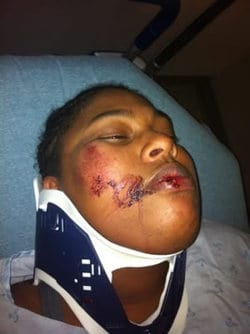 Detroit police are currently investigating what appears to be a hate crime sparked after a traffic accident last night. According to Equality Michigan, two women, 22-year old Courtney and 20-year old Kenyetta, were driving on September 26th when they were hit by another woman.

A verbal exchange ensued and the other woman called her boyfriend, who promptly arrived with four friends and told Courtney that if she "acts like a man" she will "get beaten like a man." The women were then beaten while the men hurled anti-lesbian and anti-trans insults. Courtney (pictured) was reportedly knocked unconscious during the attack.

Though police are looking into the incident, Equality Michigan is urging them to pick up the pace and even considering putting this attack on track to be heard under the federal hate crime law. Michigan's Ethnic Intimidation Act, as you can imagine, does not include LGBT people.

"Equality Michigan has been working with the Detroit Police and requested an immediate escalation of the investigation into this crime. In addition to giving the case the attention any brutal attack of this nature deserves, Equality Michigan also calls on the police and prosecutor to consider if the case should be referred to the federal courts for prosecution under the Byrd-Shepard Hate Crimes Act," said Equality Michigan director of policy Emily Dievendorf.

"Equality Michigan continues to call on the Michigan legislature to add gay and transgender individuals to the state's Ethnic Intimidation Act so hate crimes such as this can be properly prosecuted within the state of Michigan."