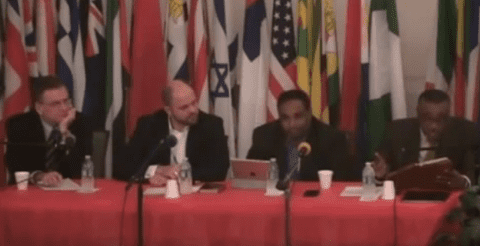 During a town hall debate about Maryland’s Question 6, a ballot measure that could legalize marriage equality there, Rev. Robert Anderson said “Those who practice such things [homosexuality] are worthy of death”.

He went on, apparently reading from a Bible, “[And] for those who also approve of those who practice these things”. According to his logic, not voting against marriage equality is like condoning death-worthy actions. “If we don’t vote against it, then we are approving these things that are worthy of death,” he said.

Asked about the meeting, organized by the anti-gay Maryland Marriage Alliance, Anderson stuck to his story, saying the Bible condemns gay people to death so voters should reject something that supports gay people.

“That’s not my words,” Anderson told NBC4 Washington. “That’s from Romans Chapter 1 written by the Apostle Paul himself.” Gay allies are “worthy of death in that they are promoting the lifestyle and they are promoting what same-sex marriage is all about, and that is what we’re standing against”.

Sultan Shakir from Marylanders for Marriage Equality told NBC, “We really think that it was very inappropriate for the Maryland Marriage Alliance to hold a panel where they used the words ‘worthy of death’ to describe gay and lesbian couples”.

Watch video of Anderson’s remarks AFTER THE JUMP.