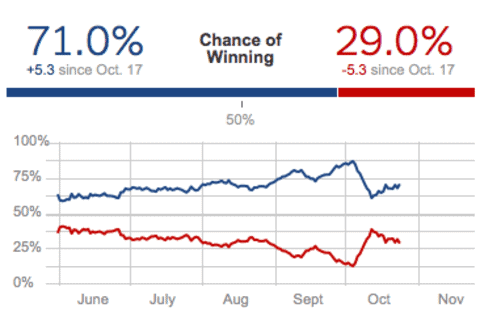 The media has been spinning a yarn in recent days that Mitt Romney's presidential campaign has "momentum". This is based on analysis of daily polls and tracking numbers.

Yes, the numbers saw Romney leading, but as Nate Silver points out, moving up a few points does not momentum make. Looking over the eight daily polls from yesterday, Silver sees that Romney lost ground in five of them, and that on average Obama gained one point. This undercuts the media's "momentum" narrative.

This is the closest that we’ve come in a week or so to one candidate clearly having “won” the day in the tracking polls — and it was Mr. Obama.

The trend could also be spurious. If the race is steady, it’s not that hard for one candidate to gain ground in five of six polls (excluding the two that showed no movement on Wednesday) just based on chance alone.

What isn’t very likely, however, is for one candidate to lose ground in five of six polls if the race is still moving toward him. In other words, we can debate whether Mr. Obama has a pinch of momentum or whether the race is instead flat, but it’s improbable that Mr. Romney would have a day like this if he still had momentum.

Part of the confusion (and part of the reason behind the perception that Mr. Romney is still gaining ground in the race) may be because of the headlines that accompany polls.

As it stands, Silver's forecast gives President Obama has an edge: 71% likelihood that he'll win the electoral college.