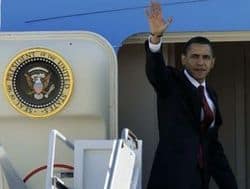 It is not just Washington state that’s getting President Obama’s marriage equality love. The commander-in-chief is also officially endorsing Maine and Maryland’s respective marriage initiatives, Question 1 and Question 6. The language of his endorsement, sent out by campaign field offices, remain the same except for the specific ballot title.

“When I first began fighting in the legislature for marriage equality,” he said.
“I would never have dared to dream that a president of the United States
would one day step forward at this crucial moment, in the middle of his
own close re-election campaign, to offer his support for our efforts.”

As for naysayers, Chip White from the anti-equality group Preserve Marriage Washington offered a reaction that both suggests there’s a double-standard for Obama’s LGBT politics and defends his organization from well-deserved criticism.

“Until May of this year, the president’s position was that marriage is
the union of one man and one woman,” he told the AP. “No one called him a
bigot or said he was unfair for holding that position. And
Washingtonians who believe in the traditional definition of marriage as
one man and one woman are not bigots.”