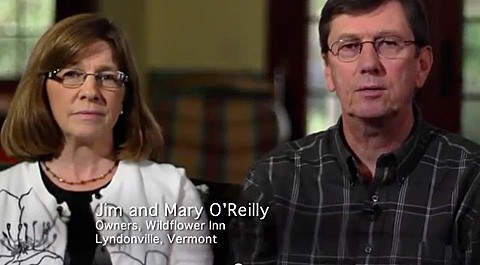 You may recall that back in August Jim and Mary O'Reilly of The Wildflower Inn in Vermont agreed to pay $10,000 to the ACLU and give $20,000 to a charitable cause after settling a discrimination suit filed by a lesbian couple whose wedding reception the inn refused to host.

As part of the settlement agreement, however, the Wildflower Inn agreed that Vermont law prohibits unequal treatment of same-sex couples, including a failure to respond to inquiries from those couples or discouraging those couples from using the facilities.

Now, the O'Reillys are sticking their noses in Maine's marriage equality battle, starring in an ad for Protect Marriage Maine opposing Question 1 there.