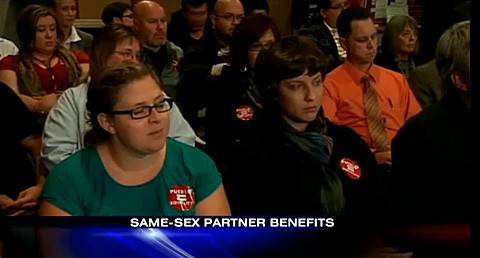 Some people cheered and others stormed out after it passed the city council by a 6 to 1 vote Tuesday evening.

At a public hearing before the vote, supporters made passionate pleas both in favor and opposition of the ordinance.

Many wore stickers that said “Pueblo = Equality” asking the council to put aside personal beliefs and focus on equal worker rights. About a dozen spoke in favor of it, saying it should be based on how hard that person works, not the gender make-up of their family.

Previous Post: « Stephen Colbert Investigates Claims That Obama is a Gay Martian: VIDEO
Next Post: Obama Watched VP Debate from Air Force One, ‘Could Not Be Prouder’ of Biden »