Last Friday, on GLAAD's Spirit Day, the East Aurora, Illinois school district rescinded protections for transgender students it had passed on Monday of that week after outcry from 'pro-family' right-wing conservative groups, the Beacon News via the Sun-Times reports: 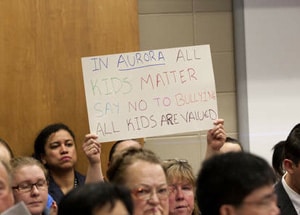 The rescinded policy said that in most cases, transgendered students
should have access to the locker room that corresponds to their
gender-related identity, and be called by the name they identify with.
It further stated that classes or teams that are segregated by gender
should also be open to students according to the gender that the student
self-identifies with.

Here's how it went down:

At a board meeting Monday, board members unanimously approved a policy addressing the rights of transgender students. On Friday, in a special meeting, that policy was rescinded. Only four of the board’s seven members were on hand for the vote. Mary Anne Turza and Stella Gonzalez were out of the country, and board member Ray Hull left the meeting early to attend his child’s Senior Night activities.

Christie Aird, the district’s assistant superintendent of secondary education who formed the policy and brought it to the board, has been put on administrative leave. Hundreds of supporters of Aird, and the policy, turned up at the school service center wearing red and holding signs, urging board members to uphold their decision.

Of course a "pro-family" hate group was behind it:

On Tuesday, the Illinois Family Institute (IFI) published a letter addressing the district, and asking for the repeal of the policy. IFI tags itself as an “independent non-profit ministry dedicated to upholding and re-affirming marriage, family, life and liberty in Illinois.”

In the letter, IFI calls acceptance of the policy “an outrageous and ignorant decision.”

Organizations including the Illinois Safe School Alliance, The Trevor Project and Equality Illinois have taken the opposite stance.

“It would be extremely sad on today of all days to buckle under to the bullying of a ‘hate group’ and not provide needed protections to all of our students in safe school environments,” said Bernard Cherkasov, CEO of Equality Illinois. “Let’s be clear where the pressure for this meeting is originating. The Illinois Family Institute … is generating the hate and the heat.”