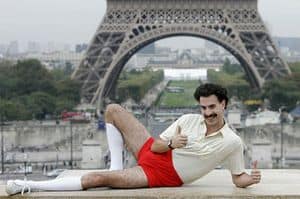 The recent offer by Hong Kong billionaire Cecil Chao of $65 million to any man who can successfully woo his lesbian daughter Gigi is in development as a feature film by Sacha Baron Cohen for Paramount Pictures, Deadline reports:

"The film’s tentatively titled The Lesbian, and is a potential starring vehicle for Baron Cohen, who presumably would play the billionaire. He’ll produce through his Four By Two Films banner. A writer has not been attached. Baron Cohen’s last film, The Dictator, grossed $175 million worldwide for Paramount."

Previous Post: « The Sun is Rising, But Do You Know Why it Got Dark Last Night?
Next Post: Gay Rights and Abortion are ‘Easy’ Cases, Says Justice Scalia »