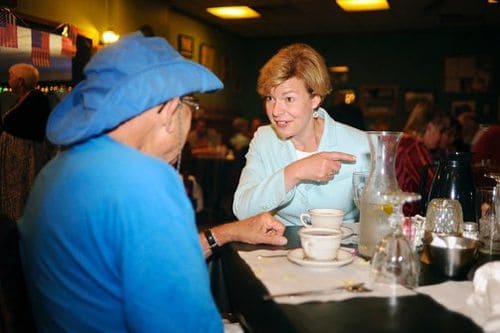 U.S. Rep Tammy Baldwin, currently running for a Wisconsin Senate seat, is four points ahead of her Republican rival, Tommy Thompson. An NBC/WSJ/Marist poll shows that 49% of voters prefer Baldwin, whose win would make her the first openly gay person to be elected to the U.S. Senate. The news comes as Baldwin and Thompson head into a debate this evening.

That same poll also put President Obama ahead of Mitt Romney by a sizable margin: 51% to 45%. But another poll, this one from Gallup, has Romney up by seven points: 52% to Obama's 45%, so basically the exact opposite.