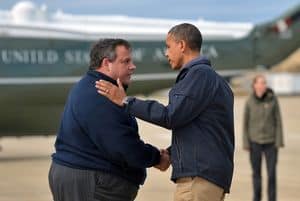 The standard line from most politicos after a tragedy — say, the Denver movie theater attack, death and destruction from Hurricanes Irene or Katrina, or the Gabrielle Giffords shooting — is to eschew politics and come together in our common solidarity. Brusque rhetoric from Governor Christie typified this perspective after Hurricane Sandy struck the Jersey Shore when he responded to a question about Governor Romney, saying, "I have a job to do. If you think right now I give a damn about presidential politics, than you don’t know me." Politicians tread lightly in this area or risk being accused of politicizing a tragedy.

But, what does it actually mean to politicize a tragedy?

Governor Cuomo said that any rebuilding plan has to include updated infrastructure reflective of the fact that dangerous storms are becoming more frequent. Is that a simple statement of fact and good planning, or is it making hay of climate change? Fox News split its screen between video of Governor Romney giving a speech with video and audio about the recovery under the guise of showing that the campaigns go on while we get back on track. Is that bald politicization even though there was no overt boosting of the Romney campaign? President Obama was quick to suspend campaigning to deal with his presidential duties. Is even that politicization because, counterintuitively, it insulates him in an apolitical environment and allows him to use the trappings of the office to look like a commander-in-chief? 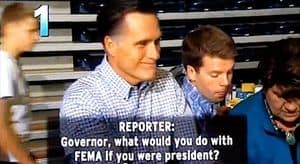 Was Towleroad politicizing the tragedy by highlighting the President's statements and not mentioning Governor Romney's? Was it politicization for Governor Romney to help relief efforts by going to Ohio, a swing state, and not the harder hit New Jersey, New York, or Connecticut, three states he will lose big? Were local campaigns, including Linda McMahon's costly campaign for a Connecticut U.S. Senate seat, taking advantage of Sandy by using the high ratings on local news channels and upping their ad buys?

It seems that the opposition can claim pretty much anything constitutes politicization of a tragedy. And, the object of that attack, be it President Obama, Governors Christie or Cuomo, or local leaders touring damage sites, can respond by saying that this is no time for politics. It sounds like yet another endless back and forth of our hyperpartisan political culture.

I disagree. There are qualitative differences between responding to a tragedy and taking advantage of one. And both were on display in this campaign in the wake of Hurricane Sandy.

Let's explore the differences AFTER THE JUMP…

There are a few ways to distinguish between a legitimate response to a tragedy and just taking advantage of one. Consider four:

2. Responses are policy-oriented solutions; people take advantage by political posturing without any substance.

3. Those not on the ballot respond; all candidates, incumbents or challengers, up for election, take advantage.

4. Responses learn from the tragedy; those taking advantage are just trying to profit from it.

Note the overlap and subtle differences. All potential definitions of respond focus outward, yet learning from something is more specific than just being selfless or writing policy. All visions of taking advantage have a personal focus, but profit is more specific than general selfishness or politicking. Let's see how.

We could see the difference between responding to and taking advantage of Sandy on a continuum of selfishness: Responses are outward focused, aimed at helping those who were harmed; taking advantage of a tragedy is self-centered, focused on how the event can benefit you. That makes some intuitive sense. The phrase taking advantage implies a personal advantage and the inverse of a selfish reaction is an unselfish one. But there is a problem with leaving the distinction at this level of generality. It's a description of character, not behavior. And, it really can't work in the political arena because any candidate can easily take on the guise of carer-in-chief and express concern for those harmed by a tragedy simply to position himself or herself to win more votes. Therefore, because helping people could be seen as a way to get you, or your party, or your ideology, to victory, this distinction falls apart.

We could also distinguish response from taking advantage by looking to the difference between policy and politics: to respond to a tragedy, you offer policy; to take advantage of it, you run to the press and posture. Again, this seems to make sense. It reflects the difference between witnessing the devastation of Hurricane Katrina and then, on the one hand, going to a microphone to claim that we should elect Democrats because Republicans failed in their Katrina response and, on the other hand, going back to one's office in Congress and writing a bill that allocates money and creates a plan for the dramatic improvement of the New Orleans levee system. But, the line between policy and politics is blurry. Policy is always political and even drafting or proposing a bill can be an act of political posturing, as with so many of the wingnut social conservative bills passed by the Republican House that were dead on arrival in the Democratic Senate.

One of the most simple distinctions is between those who are running for office and those who aren't. That is, any person running for any office will inevitably use the tragedy to somehow help his or her election prospects, while those not on the ballot could not. That is a pretty base view of human nature and, in any event, avoids the thought project entirely. I think there is a way candidates for office can respond to tragedies without politicizing them.

Perhaps we could go a little deeper than just a selfishness scale and an artificial policy/politics distinction. Responses are attempts to learn from the tragedy and any attempt to take advantage of it is simply an attempt to personally profit from it. This carries considerable theoretical and moral weight. It corresponds with our intuition about selfishness because learning implies an outward, unselfish focus, while profit implies turning inward toward personal gain. It also allows us to cabin the "getting elected" parameter to the selfish side. It takes the best part of our policy versus politics idea — the idea that policy proposals can actually do something — and includes it under the learning parameter.

What do you think about this distinction? Would you define it any other way?

For now, let's say that taking advantage of a tragedy is using it for personal political gain and that responding to a tragedy is learning from it. Given that definition, who did what in the aftermath of Hurricane Sandy? 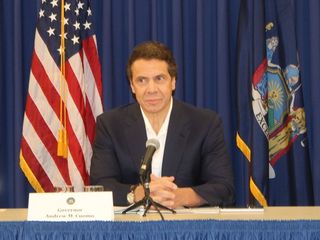 Governor Cuomo provides the paradigm for a response. Not only has he been active at every level in the practical response, including monitoring and evaluating the on-the-ground response of the notoriously backward and unresponsive Long Island Power Authority (LIPA). But he also stated that any plan for the systematic repair of everything from the New York coast to the MTA system has to reflect the changes in our climate that have brought us, as he said, "hundred year storms every two years." Governor Cuomo may aspire to higher office, but he is nowhere on any ballot, and couched his off-hand remark on climate issues in terms of how to protect New York from the unavoidable reality that storms are getting worse. He didn't bloviate on Republican willful ignorance or the Republican platform that denies the reality of environmental science. Instead, he said that New York needs to protect itself from stronger storms because stronger storms are a reality of our changing environment. That is an example of learning from experience in a socially-responsible way.

Governor Romney, the man who has been running for president since he was governor of Massachusetts, is trying to take advantage of the tragedy. He canceled events and expressed his solidarity and sorrow, but he went to help bring aid to Ohio and Pennsylvania. He used what seemed like a selfless act to simply improve his standing among the electorate in swing states (though only in Governor Romney's deluded national picture is Pennsylvania a swing state). Governor Romney showed no interest in spending time in New Jersey or New York. He is now down in Florida ignoring Sandy. And, while President Obama is also resuming a campaign schedule, his press conference yesterday gave credit to local leaders, including Governors Cuomo and Christie, and emphasized that the Administration will do what needs to be done to help victims recover. The President came to New Jersey even though he has no chance of losing the Garden State. He will campaign in Ohio, but not on how his response to Sandy benefited Ohioans.

We see here two very different ways of responding to a tragedy. Governor Cuomo worked the problem, showed empathetic concern, and connected that concern to real change. Governor Romney tailored every single part of his post-Sandy response to his quest for power. It is clear that Governor Romney would say and do anything to beat President Obama, including manipulating the victims of Hurricane Sandy.