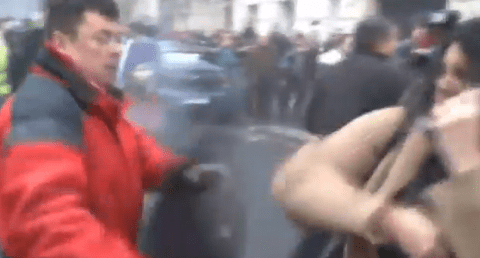 Anti-gay activists’ marches in France took an appropriately French turn in Paris today when activists from the group Femen, topless and dressed as nuns, got into scuffles with the predominantly Catholic people protesting marriage equality there.

ABC News has the details:

That prompted several anti-gay marriage protesters to hit the Femen members and push them to the ground.

Some of the bottles containing the white power were labeled “sperm,” as you’ll see in not work friendly videos AFTER THE JUMP.

One witness, French feminist writer Caroline Fourest, said of the incident, “When they moved toward the demonstrators, some of (the protesters) ran after them, raging.” Five people were arrested.