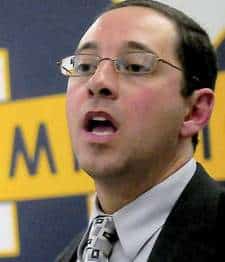 Andrew Shirvell was fired from his job at Michigan's Attorney General's office in 2010 after harassing gay University of Michigan student body president Chris Armstrong and his alleged "homosexual agenda".

Shirvell has since been ordered to pay Armstrong $4.5 million for defamation and emotional distress.

It's unlikely Shirvell has that amount of money, but he'll soon be receiving unemployment benefits that could help pay his tab:

Shirvell's original request for unemployment benefits was denied because he was dismissed for misconduct.

But Ingham County Judge Paula Manderfield last month
ordered Shirvell to get unemployment benefits, claiming he "was fired
for constitutionally protected speech" rather than misconduct.