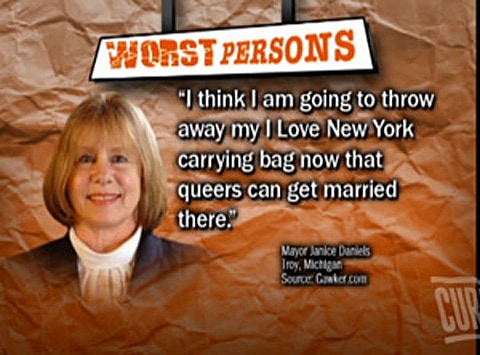 Troy, Michigan mayor Janice Daniels, who made national headlines in 2011 over a Facebook update that read "I think I am going to throw away my I Love New York carrying bag now that queers can get married there" and months later said she wanted an expert to testify that homosexuality is a mental illness at an anti-bullying forum, has been sent packing.

“We’re ecstatic,” said Matt Binkowski, spokesman for the effort to recall the embattled mayor. “We’re very happy that Troy can now finally move forward and the embarrassment of Janice Daniels’ short term as mayor is finally over.”

Binkowski said the campaign has been a long one. “Unfortunately, a lot of feelings have been hurt on both sides. I think this is the best thing for Troy.”

Ellen Hodorek, with a crowd of about 50 recall backers at Joe Kool's on Big Beaver Road, teared up and dabbed at her eyes with a napkin as she discussed the election.

"You don't know how important this is," Hodorek said. "This is important for the whole region."

Linda Kajma stood on a chair with a beer in her hand, exultant in Daniels' apparent ouster.

"I've lived in the city for 38 years. Don't mess with my city," she said. Speaking figuratively to Daniels, she added: "You can put on your red hat and get on the next train out of Troy."