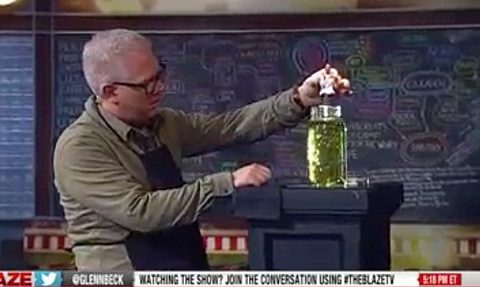 Glenn Beck tried to emulate Andres Serrano's "Piss Christ" yesterday by doing the same thing with an Obama bobblehead. "Piss Christ", as you know, has been the target of right-wing outrage for years because it was created with $15,000 grant, partly from the NEA.

Note to Glenn Beck: Your fellow wingnut Bill Donohue at the Catholic League tried this stunt two months ago with a different Obama doll, a jar, and some poop. He wants his act back.

Beck is selling his work for $25,000. He says it's not in reaction to "Piss Christ" however, but to a painting of Obama crucified, at the Bunker Hill Community College Art Gallery:

Now, the creator of “Truth,” Michael D’Antuono, said that his “First Amendment rights should override someone’s hurt feelings” and that “we should celebrate the fact that we live in a country where we are given the freedom to express ourselves.”

After receiving roughly 4,000 angry emails over the painting, D’Antuono also said he respects “their right to express themselves” and hopes they will afford him the same.