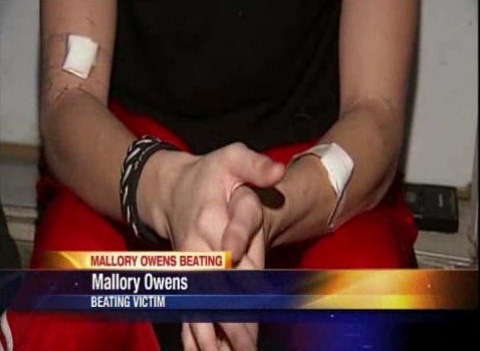 Mallory Owens, the Mobile, Alabama woman beaten on Thanksgiving by her girlfriend's brother, is speaking out about the attack and says that it was not a hate crime, allegations her own family has been making since the assault, WKRG reports:

Mallory's family told News 5 on Monday that she was beaten by her girlfriend's brother for being gay. Mallory doesn't remember much from that night, but says being gay is not the reason she was attacked.

"A lot of things have happened between us, but it doesn't make me hate her brother," said Owens. "I don't hate her family at all, or anybody for that matter."

Her girlfriend Ally Hawkins is by her side. She says her brother's actions are not justified, but he had his own reasons for the attack. They are reasons that will be released when the time is right.

"It's not a hate crime at all," said Ally Hawkins. "We both know the reason why this happened, and it doesn't make any excuses for him, I'm not defending him at all. I know why he was angry, and that will come out."

Mallory is now staying at the house where the attack happened.

Watch WKRG's report, AFTER THE JUMP…