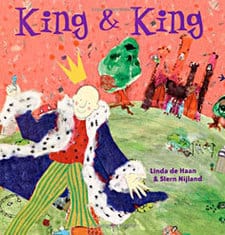 In an op-ed published today, the Boston Globe‘s editorial staff tore into right wing claims that marriage equality will lead to “homosexual indoctrination” in public schools.

As part of that erroneous argument, anti-gay activists point to a Lexington, Massachusetts, lawsuit in which a group of homophobic parents led David and Tonia Parker, sued a school for reading their kids a children’s book about kings in love.

They lost that suit, but the Parkers have been appearing in anti-gay marriage ads spouting right wing rhetoric.

“After Massachusetts redefined marriage, local schools taught it to children in second grade,” Mr Parker claims in an ad running in Maine.

But as the Globe notes, there is no such thing as “homosexual indoctrination” and that isolated incident should not be used to discriminate against our fellow Americans.

…Voters should also know that Massachusetts is not, in fact, teaching children to read, write, and have same-sex marriages. In 2006, a teacher in Lexington did read second-graders a book about a prince who marries another prince. But it wasn’t a regular subject… And the books had previously been made available for parents’ review. Not surprisingly, the scary ads omit these details.

The Lexington litigation was highly unusual, and the scores of other school districts in the state simply haven’t been convulsed with controversy about same-sex marriage. That’s not to say the issue never arises; children increasingly have peers whose parents are married to adults of the same sex, and they’re bound to ask questions. But it’s noteworthy that the one case of pro-gay indoctrination that marriage opponents regularly cite is more than half a decade old — and misleading to boot.