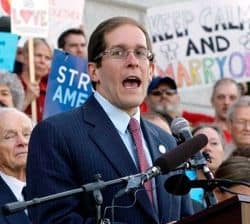 With big wins in the State House on Tuesday, Colorado Democrats won the power to pick the assembly’s next speaker and announced today that they’ve selected openly gay lawmaker Mark Ferrandino.

Ferrandino is the state’s first out and proud House Speaker and will lead 36 party peers as they work with 28 of their GOP colleagues to run the state.

Ferrandino got a bit teary during his acceptance speech, in which he spoke about being bullied while growing up in New York. “

“As a kid growing up in New York who had a learning disability and just struggled a lot, was picked on and called names, to be where I am and to have your support to do that, it’s awesome, it’s humbling,” he said, according to KDVR. “I couldn’t dream when I was in elementary school and high school that I’d be doing this.”

Ferrandino’s ascension is especially powerful because it was just six months ago that the GOP squashed a popular domestic partnership bill he helped create.

AFTER THE JUMP, KDVR reporter Eli Stokols’ conversation with Ferrandino from yesterday, after Democrats took back control of the Colorado State House and it became clear Ferrandino would be named Speaker.