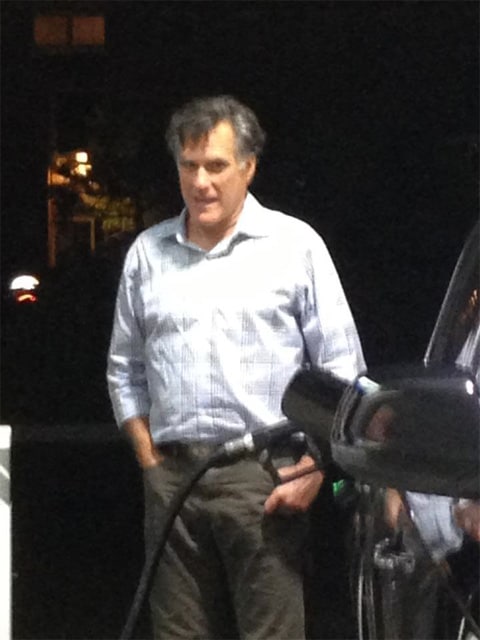 Mitt Romney was spotted pumping gas in La Jolla, California, near one of his many homes:

Romney's hair appears to be slightly frazzled, unlike the slicked-back coif he sported on the trail—though it's nothing like Al Gore's post-2000-election-loss beard. Other Reddit users countered that the former Massachusetts governor merely looked annoyed at having his photo taken at the pump.

"I talked to him for a good three minutes while he was filling his tank," the photographer added. "I guess he's moving to one of his houses in the town I live in, La Jolla."

In related news, Hank Plante writes for the SF Chronicle about the Romneys' plan to settle there, noting that it's a not so "red" area with many gay families:

And it is in La Jolla where, according to the New York Times, there are six gay households within a three-block radius of the Romneys' $12 million home.

This is not to mention that La Jolla is part of the bluest of blue states, California, where Republican registration just fell below 30 percent, and where voters said "yes" to a tax increase on people just like the Romneys.

So what gives? If you are the Romneys, then why not settle in a red state where people love you? What's wrong with Alabama, Mississippi or even Utah? Simply put, when it comes down to it, Mitt and Ann Romney seem to want the same things that so many others seek in California living: a tolerant, open, environmentally beautiful place to live that we're not afraid to pay for.