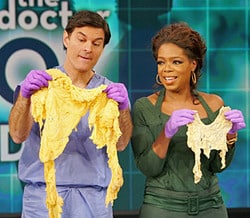 As most of us already know, this is junk science that deserves less-than-zero credence, which is why GLAAD, GLSEN and PFLAG joined forces to deride Oz’s decision.

“Producers of the Dr. Oz Show framed their program on so-called reparative therapy in a way that provided a lengthy platform for junk science,” they said. “Although the show also featured guests who condemned the idea and practice of “reparative therapy,” Dr. Oz himself never weighed in, and the audience was misled to believe that there are actual experts on both sides of this issue. There are not.”

Dr. Oz was apparently persuaded to their side, because on his website he wrote that he “agrees with the established medical consensus.”

Some guests argued that they have been changed thru these treatments, but I was overwhelmed by the pain of individuals hurt by the experience.  After listening to both sides of the issue and after reviewing the available medical data, I agree with the established medical consensus.  I have not found enough published data supporting positive results with gay reparative therapy and I have concerns about the potentially dangerous effects when the therapy fails, especially when minors are forced into treatments.

My biggest epiphany occurred after hearing where the opposing groups found some common ground. The guests who appeared on my show on either side of this debate agreed that entering into any therapy with guilt and self-hate is a major error. Trying to change who you are instead of loving who you are leads to broken spirits and broken hearts.

Encouraging self-acceptance is the only way to help alleviate the shame experienced by those who are struggling with their sexuality – and help them reach a place where who they are matches who they want to be.

Okay, great. So, moving forward, instead of calling this “reparative therapy,” perhaps we can call it manipulative, repressive hocus-pocus?