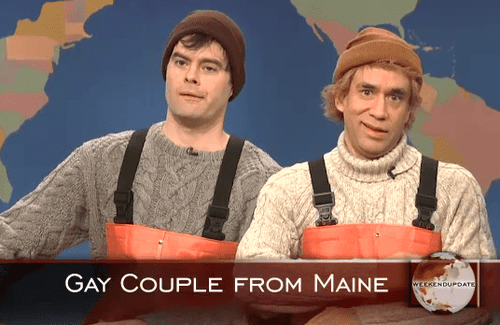 Saturday Night Live‘s “Weekend Update” segment covered the historic marriage equality wins in Maryland, Washington and Maine last night by inviting a “gay couple from Maine” — played by Bill Hader and Fred Armisen — to discuss how they met, the differences between Maine and glitzy New Hampshire and their romantic engagement. Well, romantic for a gay couple from Maine.

In other SNL news, hostess with the mostest Anne Hathaway’s monologue evolved into a spoof on “One Day,” a track from her forthcoming film adaptation of Les Misérables, and the actress also had a pretty genius turn doing “the Sloppy Swish” in a bizarre yet oddly addictive digital short called “The Legend of Mokiki.”

And she made great “roach warehouse” in the “Girlfriends” sketch, while getting deep in fictional CIA agent Carrie Mathison’s insanity during a send-up of Homeland. But it may be Hathaway’s revival of her Katie Holmes impression alongside Kate McKinnon as Ellen DeGeneres.

Check out clips of those sketches, save for the Holmes impression, which isn’t yet online, as well as two performances by musical guest Rihanna, AFTER THE JUMP. Oh, I’ve also included the cold open in which Jason Sudeikis plays a sad Mitt Romney.