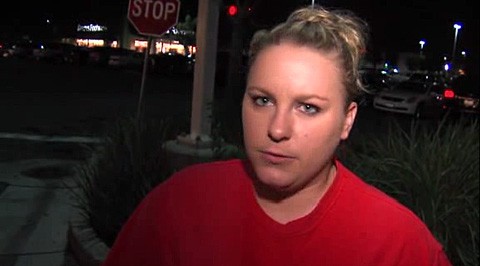 The Secret Service is reviewing remarks made by Facebook user and former ice cream store employee Monica Helms that went viral on the web and prompted her firing from her job at Cold Stone Creamery, the Modesto Bee reports:

Turlock resident Denise Helms, 22, posted shortly after the president's re-election Tuesday on her Facebook page, "And another 4 years of the (n—–). Maybe he will get assassinated this term..!!"

Helms was unrepentant in an interview with the local FOX affiliate:

She told the Fox 40 reporter: "I didn't think it would be that big of a deal. … The assassination part is kind of harsh. I'm not saying like I would go do that or anything like that, by any means, but if it was to happen, I don't think I'd care one bit."

Helms has since deleted the post and posted again about the incident. It reads: "So apparently my post last night about Obama got onto Twitter and Fox 40 came and interviewed me cause apparently a lot of people in Sacramento think I'm crazy and racist. WOW is all I got to say!! I'm not racist and I'm not crazy. just simply stating my opinion.!!!"

Watch (apologies for the autoplay) the FOX40 interview, AFTER THE JUMP…

Previous Post: « Decision 2012: What Does It Mean for the Gay Republican?
Next Post: Why Nate Silver Got Drunk: VIDEO »