This morning I reported that it was likely that Washington's Referendum 74 would pass, and moments ago Washington United for Marriage declared victory, calling it a "clear win". 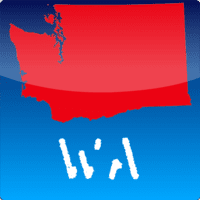 After crunching numbers throughout the night, Washington United for Marriage (WUM), the broad coalition which built an historic statewide campaign, from a record-setting donor base to an unprecedented GOTV effort, all to defend the freedom to marry, today announced that Referendum 74 will be approved by voters.

“This is a clear win,” said WUM campaign manager Zach Silk. “We have run the numbers every which way, and we can now confidently say that we have won. This is an historic day for Washington, an historic day for our country and, most of all, for families across the state who have dreamed of this day and the wedding celebrations to come.”

With 60 percent of the vote counted, R74 already has the support of 65% of King County and is performing well in key Eastern Washington counties.  Simply put, it’s now impossible for opponents to overcome the 52-48% spread for R74.

WUM built on a broad legislative effort that led to passage of the bipartisan marriage law in February.  Nonetheless, essentially starting from scratch in June, the campaign built a $12.3 war chest with over 27,000 donors, 80% of whom hailed from the Evergreen State.  The most common donation? Twenty-five-dollars, given over and over again.

Ten-thousand, three-hour volunteer shifts for a total of 30,000 hours in direct voter outreach.  Just in the last week, 100,000 doors were knocked and nearly 200,000 phone calls were logged on Monday and Tuesday.

“We made history in so many ways,” said Silk.  “Our volunteers were engaged, fired up and delivered.  There has never been a ballot campaign in Washington that had this kind of breath and depth, from field to fundraising. We have much to celebrate and much to be proud of.  With so much at stake, we challenged ourselves to do big things, and it made all the difference.”