Jim Burroway at Box Turtle Bulletin has done an excellent job at parsing Uganda's Anti-Homosexuality (aka "kill the gays") bill, explaining just what's in it: 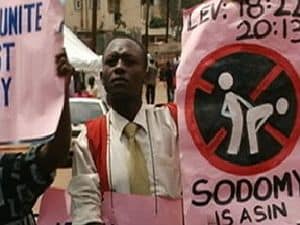 Clauses 1 and 2: Anybody Can Be Gay Under the Law. The definition of what constitutes “homosexual act” is so broad that just about anyone can be convicted.
Clause 3: Anyone Can Be “Liable To Suffer Death”. And you don’t even have to be gay to be sent to the gallows.
Clause 4: Anyone Can “Attempt to Commit Homosexuality”. All you have to do is “attempt” to “touch” “any part of of the body” “with anything else” “through anything” in an act that does “not necessarily culminate in intercourse.”
Clauses 5, 6, 8, 9, and 10: How To Get Out Of Jail Free. The bill is written to openly encourage — and even pay — one partner to turn state’s evidence against another.
Clauses 7, 11, and 14: Straight People In The Crosshairs. Did you think they only wanted to jail gay people? They’re also targeting family members, doctors, lawyers, and even landlords.
Clause 12: Till Life Imprisonment Do You Part. And if you officiate a same-sex wedding, you’ll be imprisoned for up to three years. So much for religious freedom.
Clause 13: The Silencing of the Lambs. All advocacy — including suggesting that the law might be repealed — will land you in jail. With this clause, there will be no one left to defend anyone.
Clause 14: The Requirement Isn’t To Report Just Gay People To Police. It’s To Report Everyone. Look closely: the requirement is to report anyone who has violated any the bill’s clauses.
Clauses 16 and 17: The Extra-Territorially Long Arm of Ugandan Law. Think you’re safe if you leave the country? Think again.
Clause 18: We Don’t Need No Stinking Treaties. The bill not only violates several international treaties, it also turns the Ugandan constitution on its head.
Clauses 15 and 19: The Establishment Clauses For The Ugandan Inquisition. These clauses empower the Ethics and Integrity Minister to enforce all of the bill’s provisions. He’s already gotten a head start.

The bill cleared a key committee late last week and Speaker Rebecca Kadaga has said she wants it passed before Parliament wraps up its session on December 15.

Previous Post: « Male Footballers Can’t Deny Their Lust for One Another in Hot Chip’s New Video: WATCH
Next Post: Are You Obsessed with Being ‘Liked’ on Facebook? – VIDEO »