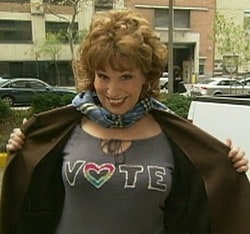 She’s find GOProud utterly confusing, she says, because they’ve endorsed a candidate who doesn’t support them.

MB: Some of the things [Ann Coulter has] said at Homocon and other GOProud events seem tone-deaf.

JC: Aren’t the GOProud guys the ones that are voting for Romney? Why would she be against them?

MB: She said if the GOP picked Romney, they’d lose.

JC: Let’s hope she’s right. I don’t understand the GOProud people either. Why are they voting for someone who’s against gay marriage, gays in the military? The Republican platform wants to roll back into “don’t ask, don’t tell.” I mean, that is completely retro. It’s not all about your pocketbook, guys. I guess they feel their money will protect them from homophobia. A lot of people felt that way, in like Germany, for example.

In response, GOProud executive director Jimmy LaSalvia tweeted at Behar that he wants to come onto The View to explain his group’s position.