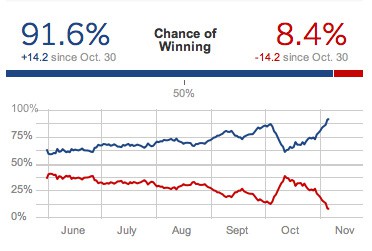 NYT polling analyst Nate Silver sees a substantial break for Obama in the final hours of this campaign, putting him at a 91.6% chance of winning. He adds:

Ohio remains the largest problem for Mr. Romney, where he has been behind in most polls all year. Mr. Romney might ordinarily take some solace in the fact that Ohio is slightly Republican-leaning, but the auto bailout may have changed its character this year, as there is evidence that Mr. Obama is performing more strongly with working-class voters in Ohio than he is elsewhere in the country.

Mr. Obama could secure the Electoral College by winning Wisconsin, Nevada and Pennsylvania, along with Ohio.

A win for Mr. Romney in Wisconsin would now qualify as a substantial upset. He has not led in a poll there since August, and an increasing number of surveys there instead show Mr. Obama five or more points ahead.

Mr. Obama’s margins have been narrower in Nevada, but Mr. Romney has a different type of problem there: perhaps 70 percent of the state has already voted, and Democrats have locked in roughly a 7-point advantage over Republicans from the vote so far. This margin is down for Democrats from 2008, but Mr. Romney would nevertheless need an exceptional turnout on Tuesday to make up enough ground.

This has led Mr. Romney to make a last-minute play for Pennsylvania, and there is some evidence that the state has tightened slightly.

Please join us tonight at 6:30 pm for a liveblog.