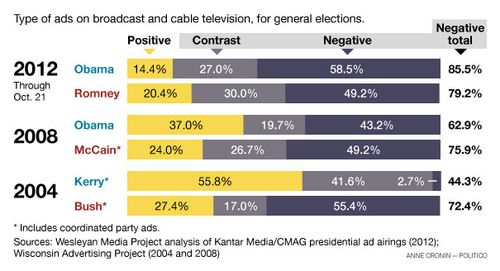 Politico reports that negative narratives are all the rage this presidential election season, and that President Obama's ads are more on trend than Mitt Romney's, but only by a little:

A full 86 percent of Obama’s television advertising and 79 percent of
Romney’s has been negative, according to the Wesleyan Media Project,
which tracks political advertising. By comparison, Obama and John McCain
had spent an average of 69 percent of their TV budgets on negative ads
by this point in 2008, and George W. Bush and John Kerry had spent 58
percent in 2004.

No wonder little Abby Evans had that breakdown.